Letting go….it’s so much easier said than done; however, God will put us in situations & allow circumstances to happen in order for us to do so. These past few years, & even months, have taught me the strength in letting go & letting God. This includes letting go of people, things I believed as true, & even things I perceived about myself. In the midst of this, I have grown so much. I’m not saying that the tests of letting go don’t occur daily, but I can say that I’m able to recognize the tests & pass them more frequently than I used to.

Whatever it is, whoever it is, or wherever you are at this moment, if God is telling you to let it go, lean on His strength & guidance to do so. In releasing it to Him, we have to know that He has so much better in mind.

God’s better is on the way, but He can’t deliver it, if you haven’t given Him a place for it to be delivered to. 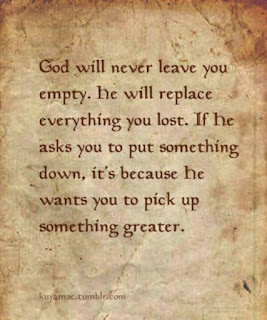 ~Lisi P.
Hire Me! Are you looking for someone to write informative, engaging, inspiring, and encouraging content? Are you looking for someone to contribute on the topics of God, Jesus, writing, travel, inspiration, gifts, and football? Are you looking for a ghost writer? Contact me as soon as possible! I am a writer at heart and have been using my God-given gift since a young age. My writings have taken me on journeys of poetry, short stories, blogging, and the beginning of my first novel. I write to share God’s love, to encourage and inspire others, and to share my Christian journey. Interested in learning more? Email me at licia31@netzero.net with any questions. I am more than happy to discuss your project with you.

This work by https://lisiplace.blogspot.com is licensed under a Creative Commons Attribution-NonCommercial-NoDerivatives 4.0 International License. ***Note*** All posts are copyrighted & owned by Lisi P. Cannot be reproduced or reprinted without permission. Thanks.